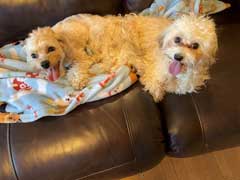 For everyone who has been keeping up with our journey on Autism America, Angel’s Among Us, here’s a more detailed update on all the puppies and their future plans!!! They are doing amazing! Angel and Benji had a total of seven puppies for their first litter! As you can imagine we didn’t expect seven, we were expecting two or three, if we were lucky. It was only by the grace of God, there would be seven puppies and that all the puppies were born healthy, happy, and alive. Starting in the order of when they were born, this is their five-month update!

First in line is Annie Oakley Draut! She is the runt of the litter, she was born on June 20, 2022 @ 8:40 am, weighing in at 4.02 oz! But don’t let her size fool you! She always ends up on top when it comes to rough housing! We have decided to keep her in the family, because of her phenomenal temperament! Now she is working on her AKC STAAR Puppy and eventually, she will begin training for her Canine Good Citizenship, and then on to earning Agility titles!

Second in line is Big Boi Draut! The biggest puppy of the litter, born on June 20, 2022 @ 9:11 am, weighing in at 5.35 oz. Big Boi lives in Atlanta Georgia, with Patrick, Kiza and Brighton Draut! Big Boi was held back to train as a Therapy Dog. Big Boi is bi-lingual as he understands both English and Spanish. Big Boi is his English name, and Conejo (Koe-neh-hoe) is his Spanish name. His brilliance shines and he’s really driving forward in his therapy work, like we have seen no other puppy do before. His senses are stupendous, and he is so good at what he is doing we have decided we want to expand his training into other areas such as search and rescue. Big Boi is very outgoing and seems all tough and he looks so big on the outside, however, on the inside, he is a soft teddy bear and cuddles in your arms.

Third in the litter is Buster, born on June 20, 2022 @ 9:51 am, weighing in 5.15 oz. This shy laid back little man went off to live with Grace in north Georgia! Grace’s grandfather Tony bought Buster as a surprise birthday gift to give Grace on her 18th birthday. Boy, was she surprised and so very happy. Buster loves to spend time sleeping at Grace’s side, while she makes her way from teenager to adult! Buster is always there to watch over her, cheer her up when she is down; he is her best friend. His favorite pastime is pretending to be Grace’s shadow going with her everywhere she goes - he has turned into a Velcro Puppy! He is a true Havanese, through and through.

Fourth up, is Ruger, born on June 20, 2022 @ 11:17 am, weighing in 4.6 oz. He has a drive on him as we have never seen before! It was honestly a close tie between Annie and Ruger when it came to who was going to stay! They both passed our test with flying colors but untimately we decided to let Ruger go because Jay and Bruce came along and it was just too perfect of a fit to be selfish! Ruger loves spending time with his new mom Jay and Daddy Bruce. They have two children and play sports! Jay and Bruce found Ruger by seeing Bullet at the football game with Remington and her family. Ruger loves to Go Go Go!!! Ultimately a decision was made to let Ruger enjoy a nice family life, with tons of Adventure!

Fifth up, is Happiness Allura Petillo, born on June 20, 2022 @ 11:40 am, weighing in 5.15 oz.! We knew from the start where this puppy would be going! Sarah is an ABC dog Trainer and lives near Tyler Texas, she reached out to us last fall looking for a Havanese puppy to train as a Medical Alert dog. By the Grace of God, we had exactly what she was looking for. Happiness is a very motivated, and a brave puppy who is always anxious to learn something new! Sarah describes her as very smart, energetic, sassy, and full of personality.
Happy is working hard on earning her Canine Good Citizenship, and eventually will go on to earn her…..
• AKC STAAR Puppy
• Canine Good Citizenship Advanced
• Canine Good Citizenship Urban
• Public Service Access Test

Sarah says for fun, Happy is going to learn how to do some barn hunting and maybe eventually some agility to keep her mind sharp!

Sixth up, is Henry, he was born at Mills Animal Hospital on June 20, 2022 @ 3:30 pm, weighing in 4.85 oz. After the 5th birth Angel just tuckered out and had to have some fluids and paregoric to start her contractions back up. We found his owner while shopping at Home Depot in Cartersville, GA. Donnette and her grown daughter came in to buy a back splash and went home with Henry. Donnette had been looking everywhere for a puppy just like Henry. I was walking out the door and Donnette and her daughter were walking in. It was love at first sight. Donnette and Tom are elated, it was simply surreal, and stunning, and they’re still in disbelief. They’re empty nesters and they’re new to GA, with the kids out of the house they are enjoying their new adventures with Henry every day!

Lastly, there is Bullet!!! Now he might have been last to be born but he hit the floor out-running all his siblings and was the first to find his forever home! This pup got paired with this the sweetest child ever. Her name is Remington, and her mother knew the minute she saw Bullet he was the perfect match for her. She said, “every Remington, needs a Bullet.” Bullet and Remington go everywhere together from open house at school, to football games, to cheer leading practice. Bullet is very much always wanting to be on top! Most of the time Bullet walks Remington, but soon Remington will be big enough to walk him. Jamie says there’s never a dull moment and that Bullet has to hide, just to be able to rest.